To The Memory of H.P. Lovecraft

To The Memory of H.P. Lovecraft is a sculptural installation by English artist Mike Nelson, first shown at The Collective Gallery, Edinburgh, in August–September 1999.[1]

The work consists of a series of white-walled gallery spaces that have been systematically attacked by an unseen force or protagonist. Violent scuffs and lacerations have been hacked into the walls all around the gallery, and in places whole sections have been scratched away, revealing the walls’ wooden and brick under-structures. The damage occurs from floor level up to a height of around four feet—which appears to suggest the intervention of some kind of animal whose scale can be surmised from these dimensions. Debris lies on the floor beneath the walls and around the space, including plaster dust, fragments of wall board, and mounds of wood chips that resemble animal feces.[2]

Alongside the interventions on the gallery walls, additional installation elements direct how visitors approach and navigate the space. In its original Edinburgh iteration, the artist screened-off the gallery’s street-facing windows and forced visitors to enter the installation through a heavy steel door, as if designed to contain the force within.[3] When To The Memory of H.P. Lovecraft was recreated by Nelson in 2008 at the Hayward Gallery, London, a large wooden trapdoor was installed over one of the gallery’s concrete stairwells. The trapdoor was propped open, with ragged scratch marks along its bottom edge again suggesting that some creature had forced it open with its claws, thus gaining entry to the gallery space.[4]

In interviews, the artist has revealed that he and his assistants created the wall marks by hand using an axe—both a laborious and time-consuming process. And in each instance of the installation, the white gallery walls were built by the artist as the first stage of the work, before subsequently being attacked.[5]

The work’s title refers to the American horror writer H.P. Lovecraft—and more specifically, to the subtitle of “There Are More Things”, a 1972 short story by Jorge Luis Borges that the Argentinian writer had written in the style of Lovecraft by way of a tribute.[6] The story concerns a house bought by a mysterious foreigner who has customized its interior and furniture to accommodate some unknown creature. Toward the end of the story, the narrator gains entry to the house, seeing evidence of the incomprehensible beast everywhere, but only coming face to face with it after the narrative ends. As in Nelson’s installation, the creature remains just off-stage. 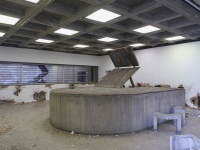 Nelson has spoken about the influence of Lovecraft on his work, citing the writer’s ability to create narrative through the conjuring of atmosphere as a crucial touchstone to the creation of multi-room installations such as The Coral Reef, 1999. Of the Borges short story specifically referenced by To The Memory of H.P. Lovecraft, it provides, for the artist, an emblematic instance of how absence can be indicated through the use of objects, the example being the descriptions of the strange customized furniture created for the beast in the house.[7]

Writer Brian Dillon has linked To The Memory of H.P. Lovecraft to Nelson’s broader installation works: "all of them seem to suggest that we have arrived too early or too late upon the scene. Something has transpired here, or is about to happen, and in that uncertainty lies a good deal of the power of Nelson's art." The 'thing' that Nelson has let loose in the gallery is, for Dillon, “ambiguity itself."[8]

In addition to the work’s overt depiction of uncaged unconscious urges, To The Memory of H.P. Lovecraft has also been discussed in relation to the tradition of institution critique in art. For curator Ralph Rugoff, the work echoes Brian O’Doherty’s celebrated essay “Inside the White Cube”, in which O’Doherty exposes the tendency of the pristine gallery space to repress the corporeality of the body (in favor of the visual or cognitive). In Nelson’s installation, “as is so often the case in horror fiction, the repressed body returns with a monstrous vengeance.”[9]