In September 2017 a massive 'fatberg'[1]—an agglomeration of congealed fat, discarded sanitary products, and other waste materials—was discovered in a sewer beneath the streets of East London. At 250 meters in length, and an estimated 130 metric tonnes in weight, the mass was the largest such blockage discovered to date, and was quickly dubbed 'monster fatberg' in media coverage.[2]

A team of eight workers from Thames Water, the private utility company that maintains the London sewerage system, worked for weeks on removing the blockage using a combination of power hoses and hand tools including pick axes and shovels.[3] The fatberg was found to be completely blocking the Victorian-era sewer that runs beneath the Whitechapel Road in London's East End, an area with many restaurants and take-away food outlets.[4] Workers removed 20 to 30 tonnes on each shift, some of which was recycled as biodiesel fuel.[5]

In 2019, a specially designed manhole cover was installed at the corner of Court Street and Whitechapel Road, as a monument to the 'defeat' of the Whitechapel Fatberg.[6]

Fatbergs form when fats, oils, and greases (FOGs) are discarded down drains as commercial and domestic cooking waste, and merge with improperly discarded sanitary products. FOGs undergo a process of hydrolysis on contact with water, separating into free fatty acids that, in turn, react to the calcium-rich (alkali) environment of the sewerage system to form hardened masses: a process known as saponification, the same mechanism by which soaps are produced.[7]

The problem has worsened in recent decades due to the increased consumer use of wet wipes, a product that mostly fails to break down in sewers, despite manufacturers labeling them as 'flushable'. Wet wipes and other discarded sanitary products, including tampons, condoms, and diapers, become bound up in the fatbergs as they form, creating a reinforced cement-like hardened mass.[8] Many brands of wet wipes include plastic strengtheners such as thermoplastic polymer polypropylene making them impossible to break down in normal sewage conditions.[9]

Fatbergs typically start to form at bends or junctions in the sewerage system, or around protruding objects such as tree roots that provide a surface to cling to. FOGs will initially accumulate around any uneven surface, which will in turn attract objects such as wipes, creating a matrix around which further FOGs will gather, to the point where the problem becomes self-compounding.[10]

The built-up masses can emit sudden belches of gases including hydrogen sulphide, carbon monoxide, and methane, and the use of breathing apparatus is usually necessary during their removal.[11] Utilities company workers have described the smell of fatbergs as akin to composting festival toilets and rotten meat.[12]

Infectious bacteria including listeria, campylobacter and E coli have been found in fatbergs, which cause a risk to the utilities workers cleaning the system, but also to the public, as blockages may cause backups in drains and overflows.[13][14] Many fatbergs go undetected until the blockages they cause result in discharges from overflow sewers: often into city river systems.[15]

Though several of the largest fatbergs discovered have been in London and the UK, the phenomenon is an issue in almost every large city worldwide,[16] with examples found from Baltimore, MD,[17] to Melbourne, Australia.[18]

The damage caused to sewerage systems, and the huge expense of having to remove the 'bergs[19] has led to widespread "bin it, don't flush it" public information campaigns to educate consumers on what can and cannot be flushed down their toilets and disposed down drains.[20][21] British environmental organization City to Sea produced an animated film in which actor Andy Serkis voiced a talking anus, encouraging the public to be a "good asshole" and not flush wet wipes.[22] A film produced by Jacksonville, Florida, utilities company JEA played on the public revulsion at fatbergs with a horror-themed trailer film,[23] an approach that has become a widespread trope in the representation of the issue.[24]

Political and legal responses have included moves to pressurize manufacturers to label wet wipes and other sanitary products as non-flushable. In New York, a City Council bill was introduced to prohibit advertising certain wet wipes as flushable[25], and in Charleston, South Carolina, the city's water management agency filed a lawsuit against major manufacturers and retailers, accusing them of false labeling.[26]

Despite these educational and legal responses, the Covid-19 pandemic has resulted in a renewed increase in fatbergs as a critical problem for water utilities companies around the world. The surge in use of sanitizing surface wipes, and the temporary scarcity of flushable toilet paper in the early months of the pandemic, saw a 75% rise in sales of wipes, and an attendant increase in the discarding of non-flushable materials down drains.[27]

Fatberg on display at Museum of London exhibition, 2018.

The phenomenon of fatbergs seems to have touched a raw nerve with the public, and ensured an ongoing media life since they were first reported as a problem.[28]

The Museum of London put a section of the Whitechapel fatberg on display in a glass case as the central exhibit of its exhibition, "Fatberg!", which opened in February 2018 and ran for 6 months.[29] Exhibition curator Vyki Sparkes spoke of the compelling nature of the exhibition's subject matter: "This is a really potent object. People are fascinated by it [...] As a society, we’ve created this unseen growing monster that lives in the sewers, a place that we depend on but never see." She compared the phenomenon to the painting in Oscar Wilde's The Picture of Dorian Gray: "it shows our disgusting side. Just as in Oscar Wilde’s novel, it is hidden away, getting worse and worse as we pile the accumulated sins of the city into it: cooking fat, condoms, needles, wet wipes, and of course human waste."[30]

The exhibition proved a conservation challenge: the museum's sample had to be dried out for a time before being put on display, and hatched flies and became covered in a layer of mould.[31] The museum, acknowledging this mutability in their object, installed a 'fatcam' to live-stream the changes it was undergoing while part of the museum’s collection. The object was hastily removed, however, when it started to grow the toxic mould aspergillus.[32] Nevertheless, "Fatberg!" was a success for the Museum of London, with boosted visitor numbers and media coverage over the course of its run.[33]

UK television's Channel 4 broadcast "Fatberg Autopsy" in April 2018, a documentary featuring a team of scientists from the University of Exeter performing an 'autopsy' on a large sample of a fatberg discovered in London's South Bank.[34] The 'berg was composed of almost 90% cooking fats, embedded within which were found nappies, condoms, syringes, tampon applicators, drug bags and thousands of wet wipes. The team analyzed the sample chemically and found numerous stimulants and narcotics, both legal and illegal, including caffeine, cocaine, ketamine, MDMA, and morphine.[35] Over half of the drugs detected turned out to be hordenine and ostarine, chemicals used in performance-enhancing gym supplements.[36] 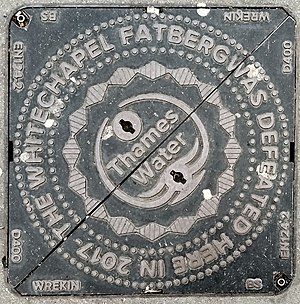 In an essay in Strelka Mag,[37] Rosalea Monacella and Bridget Keane set out to explore fatbergs as "a complex landscape ecology of the Anthropocene", adopting a series of 9 hypothetical zoomed views of a fatberg in the sewerage system of Melbourne, Australia. From abstracted systems of technological control and surveillance to the fatberg as landscape and host for microbial life, the authors set out to demonstrate "the entangled nature of the fatberg as a complex ecosystem that operates at both the scale of the city and at the micro level of the microorganism."[38]

Netherlands–based artist/designers Mike Thompson and Arne Hendricks' Fatberg Project set out to grow a fatberg in laboratory conditions, initially housed at the MU art space in Eindhoven. Launched in December 2014 as part of Dutch Design Week, their 'berg was created by dripping a combination of rendered beef and pork fats into a vat of saline solution. They invited participants to become shareholders in the Fatberg by rendering their own fats at home and bringing them to MU to be added to the growing mass. The project was accompanied by a website exploring the history of our complex relationship to fat as a substance, from uses of fat as a fuel, to our current sublimation of its material properties in abstractions such as the Body Mass Index.[39]

In his essay 'London’s fatbergs and affective infrastructuring', published in Social Studies of Science,[40] Mike Michael makes a semiotic analysis of media representations of London fatbergs and the apprehensions of the phenomenon created in the public imagination. He notes a dualism in the public enactment of fatbergs: on the one hand, disgust at their material composition, shame over the flushing of wet wipes, and anxiety over the biological threat of backed-up sewage; and on the other, a pride in the 'London-ness' of the 'bergs[41] and the bravery of the flushers who break down and remove them. His essay ultimately sounds a critical note, pointing out how the apprehension of fatbergs as a London-wide phenomenon tends to gloss social distinctions between different areas of the city, and how media portrayals of the sewerage system as a temporally-naturalized Victorian relic mitigates the responsibilities of the private utility company that maintains it.