From Archiwik
Jump to navigation Jump to search 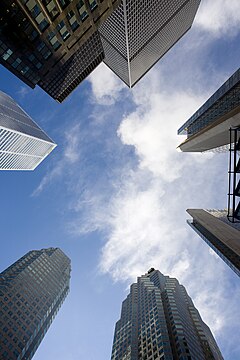 It is estimated that around one billion birds die in collisions with buildings each year in the U.S., the biggest human-related cause of avian mortality after habitat destruction.[1] While the majority of bird strikes are on private homes, high-rise office buildings - because of their scale and material construction - have the vastly higher per-structure kill rate.[2]

Toronto, the fourth largest city in North America, has had a particularly severe problem with bird strikes, especially in its downtown business area, where its gleaming high-rise towers lie in the path of a number of ancient migratory bird routes between North and South America; up to ten million birds collide with buildings in the Greater Toronto Area each year.[3]

As a result, activists in the city have been at the forefront of new legislative and legal attempts to force developers and building owners to adopt measures to alleviate the problem, at both new and existing high-rise buildings.

Migratory birds use the stars, the moon, prominent land and water features, and the magnetic pull of the earth to navigate ancient migratory paths. In the Americas, neo-tropical birds leave winter feeding grounds in South America and the southern U.S. to fly north to summer breeding sites each spring. In the fall, as their young outgrow the nest and insect populations dwindle, they return south to warmer climates where food is abundant.[4]

"Shanta Persaud was standing at the photocopier one morning when she saw a little bird fly directly into a large window of her Scarborough office building. The receptionist ran outside to find the bird on the ground, gasping for its last breath. It “just hit the glass and fell to the ground. It sounded like a pebble against the glass,” she said.”[5]

Migrating birds travel day and night, and bird strikes happen when they encounter large man-made structures in their path and become disoriented. This happens at night when city lights disrupt their ability to navigate. Even greater a problem is daytime reflectiveness, where glass-clad high-rise buildings can mirror surrounding trees and vegetation, which birds perceive as habitat, zooming at it full throttle.[6] The cause of death is generally brain haemorrhage; birds can recover and fly away, only to later succumb to internal bleeding. Others become locked into a battle with their own reflections, eventually dropping from exhaustion.[7]

Victims are largely songbirds: urban birds like house sparrows, pigeons and gulls are less prone to collisions. Bird strike victims range in size from owls to hummingbirds, and include many endangered species - eastern king birds, warblers, thrushes, woodpeckers, robins, and clear wax wings - "the vividness of their plumage generally offset by the gruesomeness of their smashed heads", as ornithologist Professor Daniel Klem Jr. puts it.[8]

Toronto, with its tightly clustered downtown office buildings, has long been viewed as one of the world's most perilous cities for migratory birds.[9]

The city's skyline began to rise in the 1960's when glass curtain-walled towers were in the architectural vanguard, eventually forming a barrier along the north shore of Lake Ontario, along which several migratory flight paths cross. The buildings are the first large structures that birds meet coming south from the northern wilderness during their fall migration.[10]

The Toronto Dominion Centre, which opened in 1967, is an architectural treasure - the last completed project of legendary modernist Ludwig Mies van der Rohe. A grouping of black towers, the centre has been one of the worst offenders for bird strikes. Campaigner Michael Mesure explained how the birds got trapped in the maze of buildings, "[they] fly close to the walls, where they felt safe, until they ended up in this dead-end alleyway and bounced up against the windows. The seagulls learned to wait there in packs and scavenge the fallen birds."[11]

Consilium Place, a mirrored glass-clad office complex to the east of the city centre is another site of avian carnage; Mesure vividly recalls a 'day of hell' at the Consilium towers, when it seemed to be "raining birds" on May 12, 2001. Volunteers recovered more than 500 injured or dead birds in the space of six hours.[12]

The Fatal Light Awareness Program was established by Michael Mesure in Toronto in 1993 to raise awareness of the city's bird strike problem and to lobby for new legislation that would force building owners to make their properties less treacherous for migratory birds. FLAP maintains a 60-strong volunteer force that patrols Toronto's downtown area twice a day during the migratory season. Volunteers collect dead birds in brown paper bags and use butterfly nets to capture injured birds to bring them to the Toronto Wildlife Centre for treatment.[13]

Forty per cent of the birds survive the initial strike; around seven hundred are cared for and released by FLAP each year. Injuries include broken beaks, damaged feathers, fractured wings, and eye damage. Some birds just require feeding with dextrose to boost their blood sugar after the trauma of the collision, or anti-inflammatories to reduce head swelling. Recovered birds are released in the spring, beyond the buildings to the north of the city, to re-join their northward migration.[14]

Dead birds are stored by FLAP in a freezer, their corpses put on display once a year at the Royal Museum Ontario.[15]

In 2010, the Toronto Green Standard was established, a set of performance measures for sustainable site and building design that includes requirements for new buildings to include specific bird collision deterrent measures.[16] Toronto councillor Glenn De Baeremaeker, one of the supporters behind the standard, has said, "This is a needless, senseless slaughter ... the birds are crushed - it is a horrific way for any creature to end its life."[17]

The deterrent measures involve muting reflections by treating glass with patterned adhesive films; a pattern of white dots, spaced no more that two inches apart horizontally, and four inches apart vertically, has been shown to be effective in preventing bird strikes.[18]

The guidelines do not apply retroactively, however, and activists have had trouble convincing older buildings to adopt similar measures.[19] Menkes, the former owner of Consilium Place, "consistently rejected proposed solutions on the basis of cost and aesthetics." At the Toronto Dominion Centre, meanwhile, the owners tried applying a black pattern to Mies van der Rohe's masterpiece, "to avoid detracting from the architect's minimalist design". Because they blend in with the building architecture, however, the black dots proved ineffective as a warning for birds.[20]

Photo: J.P. MOCZULSKI For The Globe and Mail

In 2010, two legal cases were brought against building owners by Toronto lawyer Albert Koel, of non-profit firm Ecojustice: the first against Menkes Developments, then-owners of Consilium Place, and the second against Cadillac Fairview, owners of the Yonge Corporate Centre in Northern Toronto. Koel's case was built around the legal argument that reflected light is radiation, and buildings are therefore emitting a contaminant that causes harm to animals, violating the Environmental Protection Act.[21]

As soon as the trials began, both building owners started to apply bird-friendly films to their windows. The case against Menkes was unsuccessful, and Cadillac Fairview were also acquitted, Justice Melvyn Green satisfied that the building owners had been diligent in rectifying the situation. However, as part of his judgement in the latter case, Justice Fairview ruled that two of the three charges did have substance, setting an important legal precedent that reflected light does indeed lure birds and is therefore prohibited under provincial and federal law. The ruling was seen as a victory for animal rights activists, as it will force more buildings to retroactively take measures to prevent bird strikes.[22]

Since the 2010 ruling, Toronto buildings have continued to be retrofitted with films to prevent bird collision. Globally, new technologies are being developed for the future, including screen-printed and acid etched glass, and a German company is developing a UV reflective glass coating that is visible to birds but invisible to humans.[23]

Toronto's experience has proved to be a model for other large cities. London is also on a 'central flyway', with bird collisions during spring migration an increasing problem as that city has gone through its own high-rise expansion over the past decade. Environmental and animal safety experts are now looking toward the Canadian solutions as a model for adopting similar legislation in England.[24]